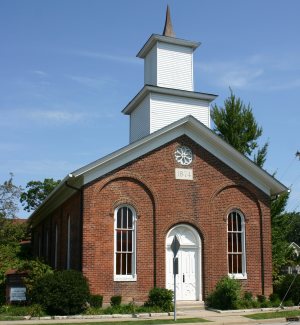 The Lake George Commercial Historic District is located along Main, Center, and Third streets in downtown Hobart. Its development began in the 1830s with the settlement of what was known as Liverpool. Liverpool was located along the Deep River and one of its most prominent residents, George Earle, purchased land around Liverpool and decided to build a dam and a mill southeast of the town.

The saw mill and grist mill opened in 1846 and Earle moved his family to a new house near the mill site. Earle also dammed the Deep River for the mills, creating Lake George. In 1848, Earle platted land for a new town, and the following year the town was named Hobart in memory of Earle’s brother.

New building technology during the mid-to-late 19th century allowed commercial buildings to become more elaborate with a minimal cost. The advent of pressed metal and cost-iron architectural details, readily available through mail-order catalogs, provided property owners with the opportunity to make their buildings unique and attractive. Hobart continued to thrive into the early 20th century, building financial institutions that often used limestone and classical details in their buildings’ designs, which projected a solid conservative image.

The First State Bank (301 Main Street) and the American Savings and Trust Bank (237 Main Street) anchored the business district’s major intersection, and both displayed Neoclassical style facades that were popular during the 1920s. Other prominent architectural buildings in the district include the Friedrich Building (614 East Third Street), which is one the district’s finest example of Italianate Commercial style, and the Hobart Post Office (221 Main Street), which was designed in Colonial Revival Style that was popular in the 1920s.

The Lake George Historic District was designated by the Hobart City Council in 2010.

54 Main Street was designated as a single-site historic district in 2007. It was designated to recognize its significance as one of the oldest homes remaining in downtown Hobart. Dating from 1895, the Victorian home overlooks Lake George and the Hobart Dam. The home has been restored on the interior and now contains 54 Main Bistro.